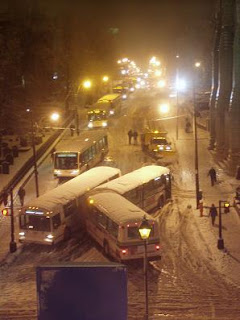 Well, it was a bit of a surprise. We were expecting rain, but alas. Snow!

You'd think after centuries of being, you know, Canadian, we'd have the hang of this winter thang. Apparently not, somehow it always catches us off-guard. The roads become jammed with commuters who looked out the window of their cozy office jobs and saw a white fluffy excuse to leave early sailing down. It was taking people three and four hours to get home. Probably because half of them don't have snow tires and the other half don't know how to drive.* I'd like to scoff, but:

Oy. Apparently, when you don't actually put the vehicle into 4-wheel drive before parking it on a hill, the math looks like this:

I'm such a clever bunny, sometimes.

I will be playing Mrs. Mitty's game of posting a snip, hopefully tomorrow. Where's yours? (C'mon, all the kids are doing it...)

*Disclaimer - Author realizes this is a gross exaggeration and is only trying to be funny.

Oh, double ouch! One for the picture and one for the dent!

You know, Michigan drivers seem to be *just like* Canadian drivers! LOL!

Every great success is an accumulation of thousands of ordinary efforts that no one else sees or appreciates.

A HAND TO HOLD